It’s time to call a professional if your chimney is leaning away or over your house or if it just doesn’t seem to be in it’s place because it’s always a dangerous situation. A leaning chimney could mean foundation damage and it could end up either crashing over your house, cars or other properties that are next to your house. The most common reasons why a chimney might be leaning include poor soils and poor footing. 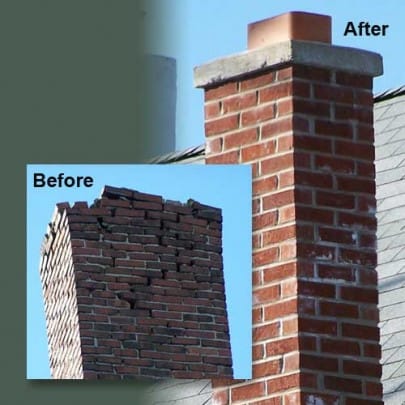 Certain soil types are not very good at bearing the weight of the chimney hence they might cause problems. Clay soils which are also referred to as expansive soils because of their tendency to expand when exposed to water and contract in the absence of water. So the soil will expand and contract depending on the moisture level therefore causing movements which are likely to tilt the chimney.

Related : Protect Your Los Angeles Home Against Mudslides and Landslides

Another common reason why you might have a leaning chimney is because of poor footing or the lack of it. If the footing is exposed to a lot of water, it will eventually deteriorate and cause the chimney to lean. The chimney is also likely to lean when the footing is too shallow or small that it can’t hold the weight of the chimney. And the chimney will at some point start to lean if it was built without any footing during construction.

It’s advisable to call a professional the moment you notice the early signs of your chimney tilting away from your house or leaning chimney over your house because this is not something that you can repair by yourself. When the leaning or damage is too severe the chimney will need to be rebuilt and if the leaning chimney is not too bad, then underpinning pads can be used to repair the chimney and provide additional support to the chimney and footing area to support the load and strengthen that section.

Call California Foundation Works on 323-418-2239 to schedule a chimney inspection and estimate.