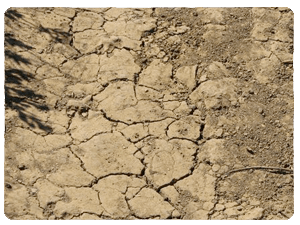 Expansive soils which can also be referred to as clay soils tend to not drain water properly because of their tightly packed particles. This means that most of the vegetation on your yard will suffer from not having enough water and might die out. And If a yard on a steep slope can’t grow any vegetation on it, then it will risk having other problems such as soil erosion, mudslides and landslides. Other drainage problems include the easy pooling of water after rainfall.

Expansive soils will exert tremendous amounts of pressure on anything in their way. As depth increases, so does the pressure that the soil gets to exert because of all the weight it’s holding. So hillside home foundations are at greater risk of getting affected by the expanding and shrinking of soils because they are mostly built deep underground. Once the foundation is damaged by the pressure, the cracks will allow water to seep in and cause the damage or the damage from the pressure itself will compromise the load bearing properties of the foundation.

Damage due to expansive soils might be mistakenly attributed to other things because most people don’t understand them and because damage happens very slowly over a long period time. Contact a licensed foundation contractor If you own a hillside home and are worried about the possibility of expansive soils damaging your home. Call California Foundation Works on 323-418-2239 to schedule a free foundation inspection and estimate.